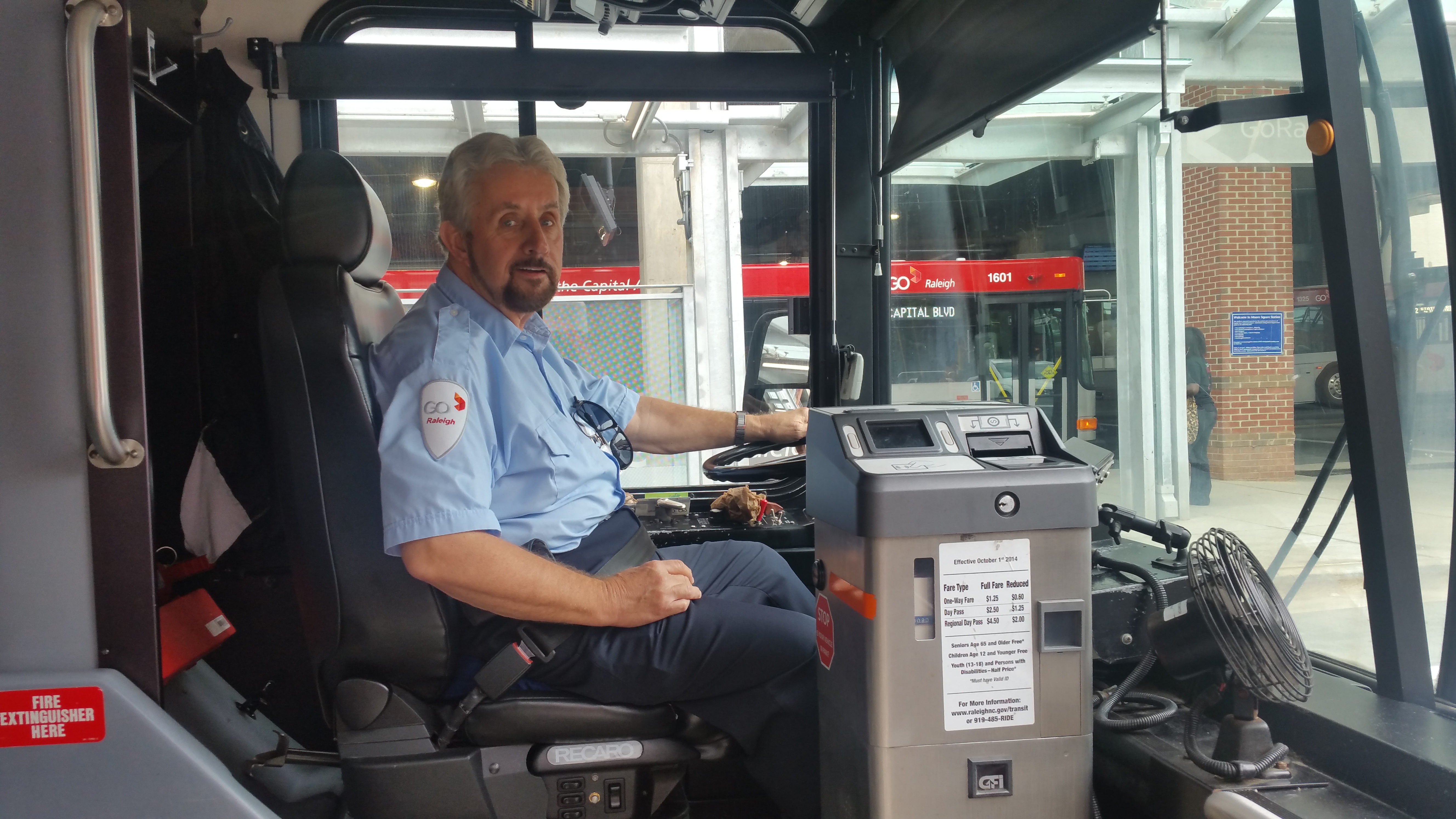 Ron Wilson has been a bus driver for the City of Raleigh for 40 years, starting in 1977 when GoRaleigh was called Capital Area Transit (CAT). His last bus route pulls in on Thursday, June 22.

Mr. Wilson began driving for CAT in 1977 at the urging of his uncle who also drove for CAT. At the time, Mr. Wilson had been driving for the Coca-Cola company out of Durham for six years. His uncle made CAT sound like an even better way to drive. And now, Mr. Wilson agrees. A few years ago, a friend that he worked with left the job and commented, “I don’t know how you like what you do.” Mr. Wilson replied, “I don’t really like it… I love it.” And if you talk to him for a while, you’ll see why. He really is what some would call a people person. “Honestly, it’s been a lot of fun, too,” he says. “You meet a lot of interesting people.”

Mr. Wilson’s favorite route is the #11 Avent Ferry route. His second and third favorites are Route 2 - Falls of Neuse, and Route 12 - Method. Years ago, when his wife worked off of Oberlin Rd, she would hop on his route during her lunch break. Just last week she rode along with him one more time. He told her that’s not the last time they’ll ride the bus. They both got their GoRaleigh senior ID cards that guarantee free bus rides anytime they like. He plans to take her on a date to North Carolina State University’s Athletic Hall of Fame, grab some food at the Avent Ferry shopping center and then head to the movie theater on Blue Ridge Road --- all in one day.

One of his passengers who rides the bus on Route 2 to his job in Downtown Raleigh every day asked Mr. Wilson what he’d like to do after retirement. Mr. Wilson said he’d like to travel. The next time he saw the passenger, the passenger brought him a cruise magazine, specially marked with cruises he’s been on with suggestions. Now Mr. Wilson flips through the magazine and thinks about where he’d like to go first.

When asked what he’ll miss about driving the bus, “The customers. I relied on seeing them all the time, now I won’t see them anymore.” He was good about letting his regulars know when he’d miss a route due to appointments or time off. One of his regular passengers didn’t get the message one day and missed the bus. Mr. Wilson has since reminded his customer to get there earlier from now on since he’s retiring.

Mr. Wilson has his share of interesting stories over the last few decades. One really stood out. Over a dozen years ago, along Dixie Trail, he would let off a woman who stepped onto the red carpet- a red carpet her significant other would roll out every day for her for months. Sometimes he’d be dressed in a tuxedo carrying a tray with champagne on it. Other days he’d do something just as fancy. This went on for months. It’s one of his favorite stories.

Mr. Wilson retires at the end of this week. His career with the City of Raleigh’s transit system will be celebrated on Thursday and Friday:

Thursday, June 22 – This is Mr. Wilson’s last bus run of the day; friends, family and the media are invited to greet him at GoRaleigh Station, Platform E, at 1:38 p.m. Media are also invited to board his routes on the final day. For specific routes and times contact Kelly Wright, 919-996-4042, or email kelly.wright@raleighnc.gov.

Please note: The media is invited to interview Mr. Wilson about his career on both occasions.