The city has planned another bus rapid transit event for June 25 to talk specifically about the design of the New Bern Avenue corridor, which would connect the central business district in downtown Raleigh with WakeMed and New Hope Road. 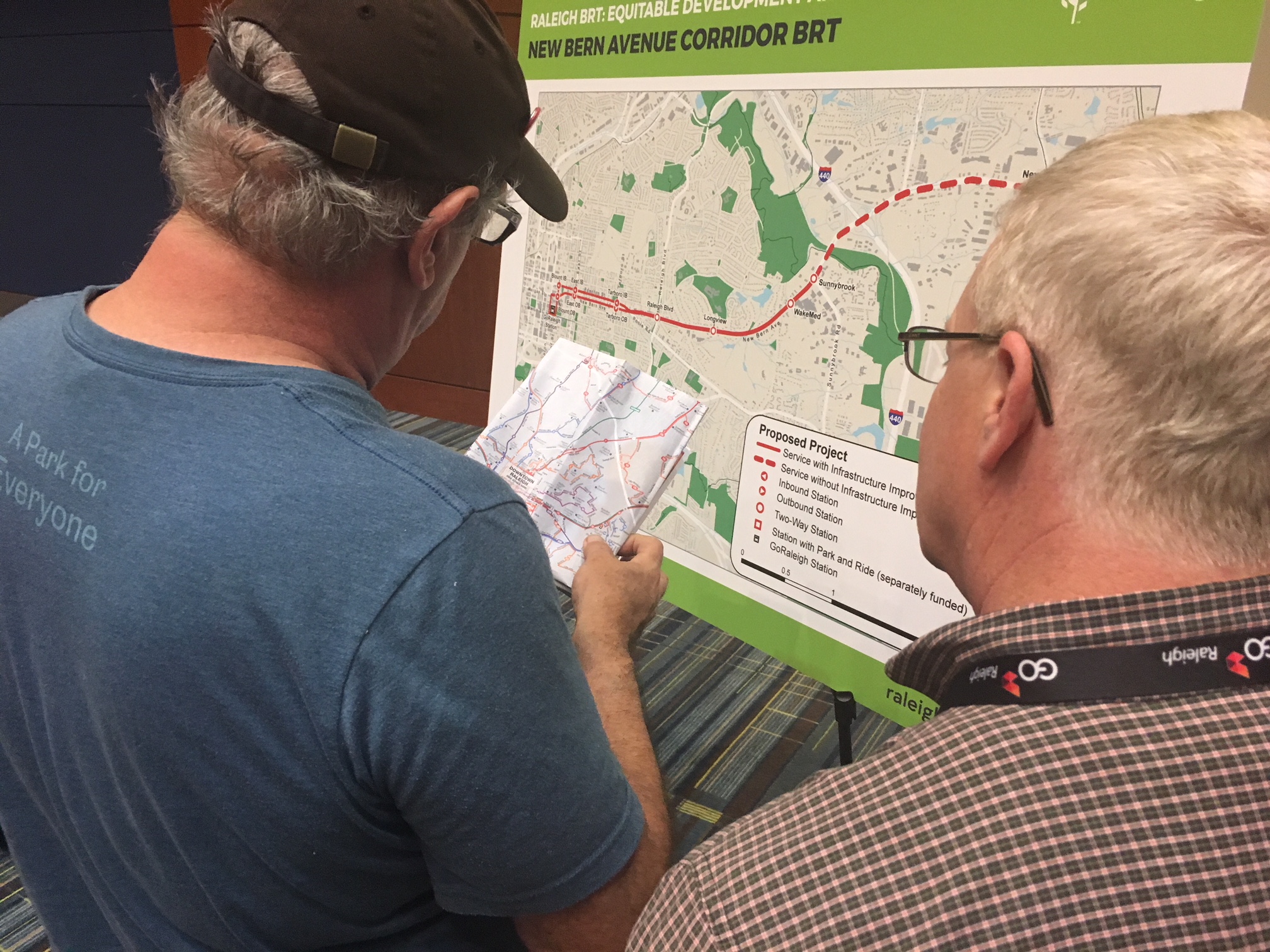 Part of Jason Hardin’s job as a planner for the City of Raleigh is to be the project manager for equitable development around transit. That’s how seriously committed the city is to expanding transit and shaping the development around it in ways that increase access to opportunity for those who rely on transit the most.

Equitable, in Hardin’s mind, means to make sure the community’s investment in the coming bus rapid transit corridors benefits everybody.

“Equity and affordability are two issues the Wake Transit Plan will address,” he says before giving a presentation at a transit open house this month at the Raleigh Convention Center. “The fact is, it’s embedded in the plan itself. I know the pace of change in some neighborhoods concerns residents, but BRT is not going to cause it or add to it to a significant degree. I’d say BRT will be a solution.”

Otis Allen, a retiree who lives in Southeast Raleigh, attended the open house June 6 to hear about how bus rapid transit might affect established small businesses along the four corridors that Wake County has planned, especially on its first corridor on New Bern Avenue.

“But I think BRT is a really good thing,” says Allen, 69, who is most looking forward to the new bus shelters and benches included in the Wake Transit Plan. “BRT is the best benefit in the city in recent years.”

The Wake Transit Plan, approved by voters in 2016 and funded with a half-cent transit-designated sales tax, calls for bus rapid transit along about 20 miles of congested roads: New Bern Avenue between Raleigh Boulevard and WakeMed, Capital Boulevard between Peace Street and the Wake Forest Road intersection, South Wilmington Street toward Garner, and Western Boulevard between Raleigh and Cary.

BRT uses dedicated bus lanes and priority at traffic signals to help bus operators keep their routes on schedule and features stops with raised platforms, making it easier for passengers with wheelchairs, strollers or bicycles to board the bus.

“Now if you take a route and you have to transfer, that time limits the number of jobs you can get,” Hardin says. “BRT will expand that number dramatically. This is an opportunity to take stock of the situation and make sure there are not other tools out there we need to be using. Having these conversations makes us stronger as a community.”

Learn more about Equitable Development Around Transit on the project page raleighnc.gov/equity. The city also is conducting a survey on bus rapid transit that residents can take here.

The city has planned another bus rapid transit event for June 25 to talk specifically about the design of the New Bern Avenue corridor, which would connect the central business district in downtown Raleigh with WakeMed and New Hope Road.

Community members can drop in any time between 4 and 7 p.m. at Martin Street Baptist Church in Raleigh and discuss the plans with city staff members. Find more information here.

Sidewalks on the way!

In addition to connecting people to job, education and health care opportunities, bus rapid transit also supports walkable places with both housing and commercial destinations, improves air quality by reducing the number of vehicles on the road and saves money for those who drive less or opt out of car ownership altogether.

Walkability improvements to the New Bern corridor already are under way, in fact, with designers planning sidewalks that will extend from Tarboro Street to Sunnybrook Road along both sides of New Bern Avenue. Plans call for 14-foot-wide sidewalks with trees and pedestrian traffic signal changes from Tarboro Street to Raleigh Boulevard. Between Raleigh Boulevard and Sunnybrook Road, an 8-foot-wide multi-use path will look much like the greenway trails throughout Raleigh. Find more information about the pedestrian improvements here.

After the open house June 25, the city is planning bus rapid transit workshops for September and then meetings in late 2019, with station area plans being developed in early 2020.

“We’re growing in ways here where driving is the only realistic option, but the American dream should not include a 60-minute commute to and from work each day,” Hardin says. “This is a rare moment. The issue and the opportunity are perfectly aligned. The affordability issue is not going to solve itself. This is a once in a generation opportunity, this investment.”

Find out more about transit plans in Wake, Durham and Orange counties at goforwardnc.org.